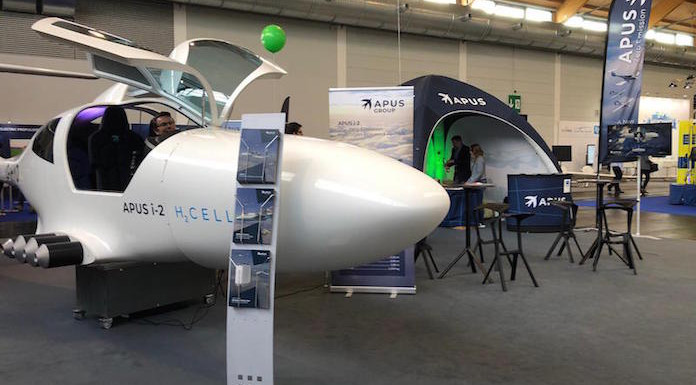 Experience the APUS i2, the first commercial, zero-emission aircraft with 500NM range and hydrogen drive as part of the Hydrogen + Fuel Cells EUROPE at the HANNOVER MESSE on May 30th – June 2nd, 2022, Hall 13, Stand A50.

Following the successful presentation at the AERO Friedrichshafen, the demand for our climate-friendly APUS i-2, the first uncompromisingly designed for an emission-free hydrogen drive, has already surpassed our expectations.

With several pre-orders at AERO Friedrichshafen, the Apus i-2 is attracting the attention of buyers in the CS-23 category. At the show a new partner has joined our pool of exclusive resellers: SXI – Southern Cross International B.V. – signed a partnership agreement for exclusively selling our Apus i-series in the Benelux region.

A storage system efficiently integrated into the structure of the four-seater aircraft has been the focus of APUS’ research projects since 2015, together with renowned research and industry partners. The wings contain four tanks, which are not only used to store the gaseous hydrogen, but also as a load-bearing structure. The pressure of the stored gas is 250 – 300 bar. The aerodynamic load acting on the tank structure is just 30% of the load introduced into the structure by the gas pressure.

The entire tank structure weighs 240 kg, of which the larger tank tubes weigh 80 kg each. Fully filled, the tank has a capacity of 23 kg of hydrogen. Two electric motors, 135 kW each, consume the energy of 5 kg of hydrogen per hour. This allows a range of 500 nautical miles and a cruise speed of 160 knots. Assuming a hydrogen price of 7 €/kg and an AVGAS price of 3 EUR/l, the direct cost saving will be 40% compared with a conventional aircraft of the same category, for example the Cirrus SR22 and including the amortisation of the powertrain cost.

The i-2 has a payload of 400 kg and a maximum take-off mass of 2200 kg. The avionics will feature the Garmin G 1000 line. A conventional mechanical control system will be used while the retractable landing gear will be operated electro-hydraulically.

APUS is already in the process of testing the powertrain and the hydrogen tanks as well as manufacturing the first parts for the flying prototype. The first prototype of the i-2 is expected to be completed next year and the first flight is scheduled for late 2023. The CS-23 certification has been applied for with EASA and the coordination on the certification plan has already begun with the relevant authorities.

In parallel with the i-2, APUS is developing the larger multi-mission i-5 program, which will include the same hydrogen tank as the i-2. The first flight of the prototype, which is being built in cooperation with Rolls-Royce, is also planned for 2023. With a maximum take-off mass of 4800 kg, the payload is 1770 kg. In the passenger version, there is room for 14 occupants. Cruise speed will be 160 knots and range will be 800 NM. Operating costs will be 40% less than those of a Cessna 208B Grand Caravan turboprop single-engine aircraft. The focus of the APUS i-5 will be regional aviation and regional logistics.

In order to realize its Clean Aviation plans, APUS is looking for further investors and is particularly looking forward to making contact with potential investors/stakeholders at the Hanover Messe.

HANNOVER MESSE is back! Register your free ticket now